RFID or Barcodes, How to Choose?

Barcode labels have been the industry standard in retail and logistics for over 30 years, but other technologies, namely radio-frequency identification (RFID), have greatly diminished the luster of barcodes in the past decade. While both are well suited for certain applications, the advantages of RFID over barcodes are great in number and significance.

Comprised of a series of parallel black bars representing identification information, a barcode is read by an optical device such as a scanner. Information in a barcode is encoded by varying the widths of the bars and the distances of the spaces between each bar. Recent iterations on the barcode have used different shapes other than the traditional bars and are capable of being read by a greater range of devices. Today, many smartphones are able to scan different types of barcodes.

RFID is implemented using radio waves to communicate information between a unique item and a system. A typical RFID system consists of an RFID reader, tags (chips), and at least one antenna. RFID systems can be either active or passive. Active RFID tags contain a battery and periodically transmit information with much greater range than passive tags. Passive tags are powered by electromagnetic induction via the RFID reader. Once the tag is powered by the reader, it responds by transmitting its unique information. Read More about Types of RFID

RFID has many advantages over barcodes, but barcodes have become a standard in many industries for many worthwhile reasons. Depending on the application, either system will have its strengths and weaknesses. When it comes time for you to make a decision between either system, keep the initial and recurring costs in mind, as well as the potential return on your investments. In years past, implementing a full-scale RFID system was cost prohibitive for small to mid-size companies, but today, the difference in the cost of a new barcode system versus an RFID system may be minimal in certain applications. Also, investing in an RFID system may pay for itself over time due to potential increases in efficiency and decreases in errors. Read More about Deploying an RFID System

With an RFID system, you could see improvements in your business due to these advantages:

For a barcode to be read, the scanner must be placed directly in front of each label, and both need to be oriented in a very specific position in order to work properly. RFID tags on the other hand, don’t need to be directly in sight of an RFID reader. Because RFID uses radio waves to communicate, RFID tags only need to be within the read range of the reader, which will vary depending on the equipment.

An RFID tag is read/write.

RFID tags are durable and reusable.

Because barcodes are typically printed on paper labels or other unprotected surfaces, they are easily damaged and rendered unreadable. Depending on your application, you can find RFID tags specifically designed to work in harsh conditions. A durable hardcase protects these RFID tags from impacts, heat, moisture, and changing weather conditions. As we mentioned previously, since RFID tags are updatable, they can be reused, which will cut costs in your deployments.

Barcodes are easily counterfeited, and the data itself is always readable. With RFID tags, your data is much more secure as the information has the ability to be encrypted. Also, it’s much more difficult to replicate RFID tags recognized in your system.

Standard barcodes are limited in the amount of information they are capable of representing. An RFID tag actually stores data in non-volatile memory and is capable of storing up to 8 kilobytes of data in certain tags.

Each barcode must be individually scanned in order to be entered into the system. RFID systems can read multiple tags at the same time, and do not need line of sight. Since RFID readers are capable of reading hundreds of tags at once, the increase in read rate saves you time that can be spent elsewhere.

RFID tags can be printed with a barcode.

If you have a barcoding system in place, but would like to make the switch to RFID, or perhaps you have need of both barcodes and RFID, you may find using RFID tags with printable paper labels to be quite advantageous.

Overall, RFID systems have many more features than simple barcoding systems, but both RFID and barcodes are good fits for certain applications. Each situation must be analyzed on its own in order to determine if RFID is the right call. 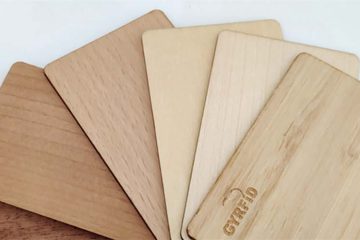 Advantages of RFID/NFC Cards Made by Wood

RFID/NFC Cards Made by Wood Help the Environment Wood is an extremely sustainable material. Processing wood is efficient and environmentally friendly. Its low energy consumption and low pollution levels make it ideal for packaging and Read more… 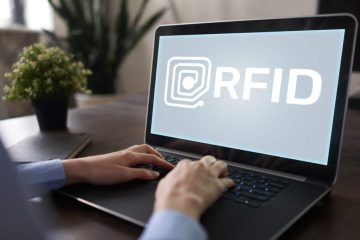 What RFID Tag Supplier Can Help You on Business

Intro RFID technology can help retailers and other businesses manage their inventory more efficiently and effectively. The technology helps stores detect stock outs and prevent items from being left in back rooms undetected. It also Read more…

What Can You Do With An RFID Tag

What is an RFID Tag? An RFID Tag is a small device with a microprocessor and memory. The latest tags have 40 to 50 thousand transistors, making them similar in size to an IBM PC. Read more…